The Texas Early Learning Council was an advisory council established by Governor Rick Perry in late 2009; Governor Greg Abbott appointed a subsequent Council in 2019. CLI housed the Council’s offices and staff from 2010 to 2013, and continues to support the outreach and awareness efforts for all tools and resources developed during this period.

In 2010, the Council was awarded a three-year grant from the federal government to achieve a series of goals towards improving school readiness in Texas through targeted strategies stemming from the Council’s four priority areas. View the Council’s final report to learn about the proposed projects and successful delivery of tools and resources for the state.

Over the course of three years, the Council spent $11.4 million in American Recovery and Reinvestment Act (ARRA) funds to improve key aspects of early care and education in Texas. Impetus and rules for the Texas Early Learning Council and other similar entities throughout the country were both created in the Improving Head Start for School Readiness Act of 2007, which required the Governor of each State to designate or establish a council to serve as the State Advisory Council on Early Childhood Education and Care (referred to simply as State Advisory Councils).

Approach: The Texas Early Learning Council had an ambitious plan that exceeded the expectations of the Head Start for School Readiness Act. The Council’s workload for the next three years is high; therefore, four subcommittees were formed around the Council’s main priority areas in order to complete the critical work of the Council. Council subcommittees drove the implementation of Council objectives. On specific tasks and goals, Subcommittees partnered with key stakeholder groups, national experts, and consultants to ensure high-quality and relevant products were created. 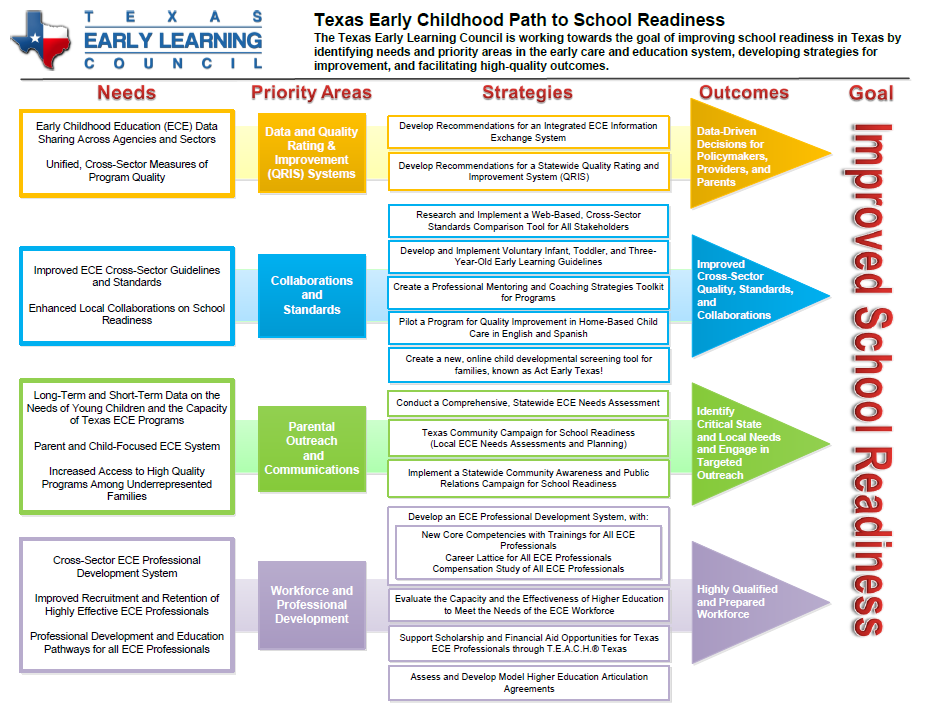